Unbox a rich history embracing 78 years of memories immersed in tradition, commitment and quality, in every stick.

Asoka Trading Co. since 1943, delivering on the promise of perfect incense for every occasion! 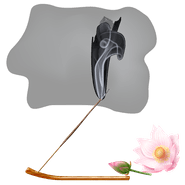 Tracing the origin of a sweet scent that has now spread into households across the globe! For everyone associated with Asoka Trading Co., scent means sentiment… a personal emotion.

T. V. Chalamiah Chetty, born in a small town into a family of farmers, grew up in a pre-independent India with a determination to do great things. He moved to Bangalore as a young man of 21, and made a life for himself by working at an incense making unit he learnt the art of incense and also keenly observed consumer practices & market demands. This was his opportunity to do what he always wanted to do… start a business and provide employment to people. He took it as a challenge to bridge that gap and write his own success story.

Mr. Chalamiah Chetty, with big dreams in his eyes and great hope for the future, started Asoka Trading Co. in the year 1943.

Asoka Trading Co. had a humble beginning as an incense stick manufacturing unit, Mr. Chalamiah Chetty’s fearless attitude always kept the company one step ahead of the market demands. He worked very hard to make sure the quality of the products coming out of his company were flawless.

On the other hand, the enterprising nature of Mr. Chetty wanted to explore new ideas and new range of products. Asoka Trading Co. imported best aroma ingredients from around the world, to produce one-of-a-kind incense products.

In the year 1983, Asoka Trading Co. launched a new brand of incense sticks by the name “Bharath Darshan”, as always it was a researched endeavour which showed results immediately by becoming an instant hit among incense users.

Bharath Darshan was the result of coming together of old traditions and new ideations. The new generation had started to get more involved in the operations of the organization. So, Bharath Darshan was essentially Mr. T. Srinivas’s (Chalamiah Chetty’s eldest son) idea. Under his guidance, the company took newer steps with bigger ideas and braver actions.

Where the company stands now…

Today, as the 3rd generation has taken over the reins of the company, the products coming out of Asoka Trading Co. are a household favourite across India. The company is among the top 10 incense brands in the country. Plus, our products are much in demand in over 35 countries globally.

We have aroma inventers who research every single application and deliver a product just perfect to suit any requirement. Every single operation runs with quality as a benchmark. We can’t claim to be perfect; no one is. But our endeavour is to leave no room for error… in spreading the sweet scent and sense of incense.

We have been fortunate to have inherited the sweet scent left behind by the extremely brave and deeply spiritual Chalamiah Chetty, a scent that is wrapped in time and is endless. He must be satisfied that he has brought satisfaction and contentment to his beloved consumers.

The seed of a small dream and hope sown in 1943 had grown in proportion and turned 75 in the year 2017, marking the platinum jubilee.
Asoka Trading Co., 75 years and beyond.